When you create a budget using the integration between Sage Intacct Planning (SIP) and Sage Intacct, you have the option to populate your budget with the imported budget data, accounts, actuals, dimensions, etc. Using the Create budget wizard, you can organize this data from Intacct into a budget structure by dimensions (such as by location, by department, by both location and department, as well as a myriad of other combinations) based on how you plan to manage your budget. See Create a budget using my Sage Intacct data for more information.

That is if you have an expense for the Marketing department of your company subsidiary in Texas, and your budget structure was created by Location and by Department, the expense data is populated to a budget line that matches the following structure: Operational Expense (budget group) > Texas (location dimension value) > Marketing (department sub-dimension value). If no department dimension value appears in the transaction or no location appears, then there is no exact match to your budget hierarchy, and the transaction isn’t imported.

Now when you populate your budget, even transactions that only partially match the dimension hierarchy you defined during budget creation can also be imported, as long as the transaction contains a dimension matching the parent level of your budget hierarchy. So, for instance, if you create your budget by Location, Department, and Category, but your transaction doesn’t have a value for the sub-dimension (e.g. Category), the data is still imported, but to the next matching parent dimension level.

For example, let’s say you created your operating expenses budget structure by location, by departments, and by categories dimensions. 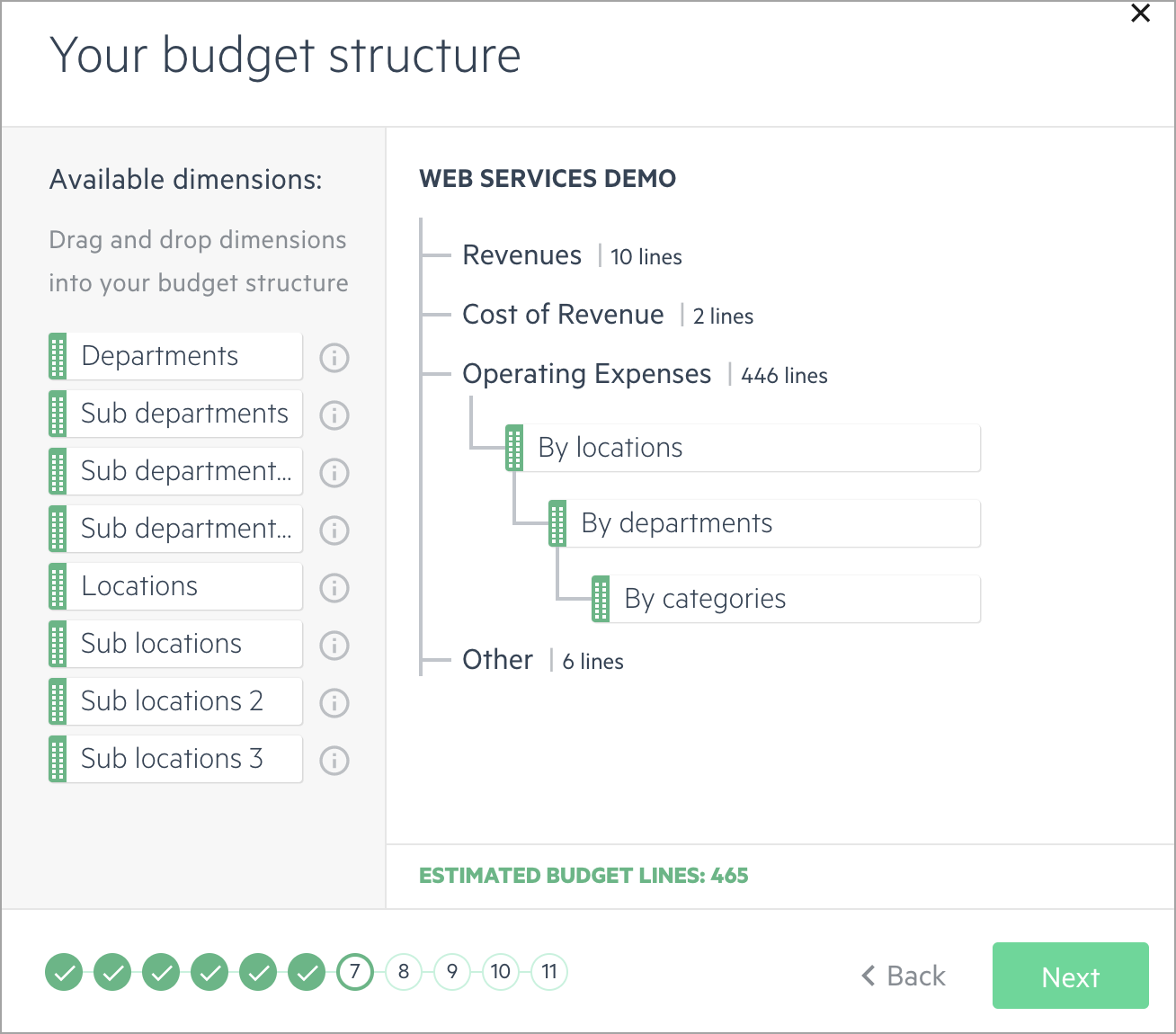 In this case, since there is no dimension value for Category, a budget line is created in SIP under the Marketing department of the Location (Texas) > Department (Marketing) budget hierarchy.

Now, let’s say that your transaction contains Location and Category dimension values, without a Department dimension value. Here, there’s a mismatch between the budget and dimensional hierarchies.

In general, your budget data is imported to the lowest level (or the lowest common denominator) of your budget hierarchy that exactly matches the dimensional hierarchy you defined for your budget structure. However, although the transaction has a dimension value for the Category dimension, the data can’t be represented in the existing structure if there's no value for the Department dimension. Rather than omitting this data entirely from your budget, the data is imported to the next highest level that represents the full budget hierarchy and matches the dimension value.

In this case, the transaction is imported to a budget line under the parent level Texas.

Keeping with the examples already explained in this article, here are some additional use cases to assist you in understanding the logic behind populating data from Intacct into your budget structure in SIP.

In the following table, the full budget line hierarchy displayed is purely to help you understand where in the structure the budget line is added. In actuality, if there's no matching value, only the next highest level (i.e. above the budget line) is displayed. 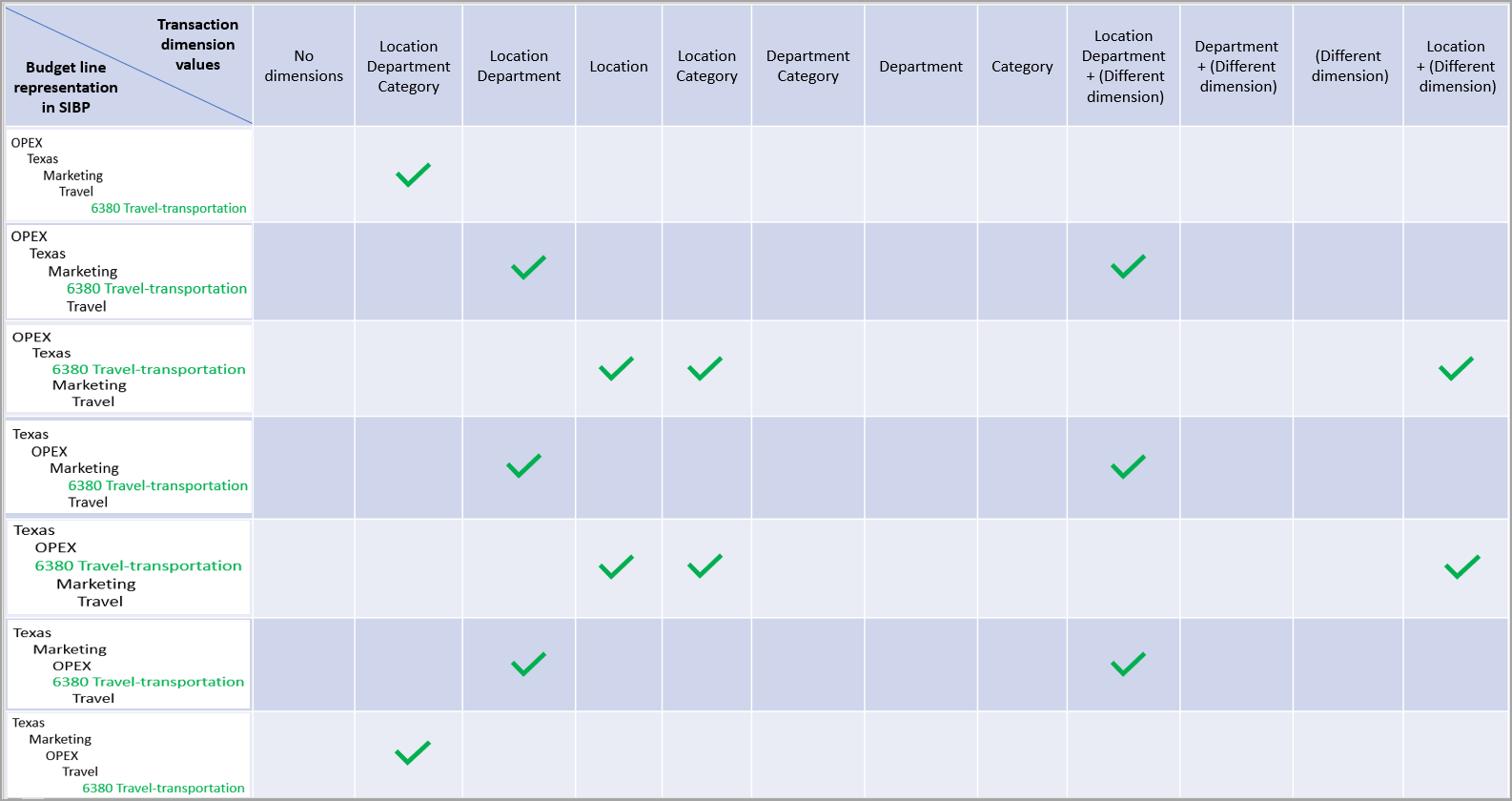 See the data missing from your budget 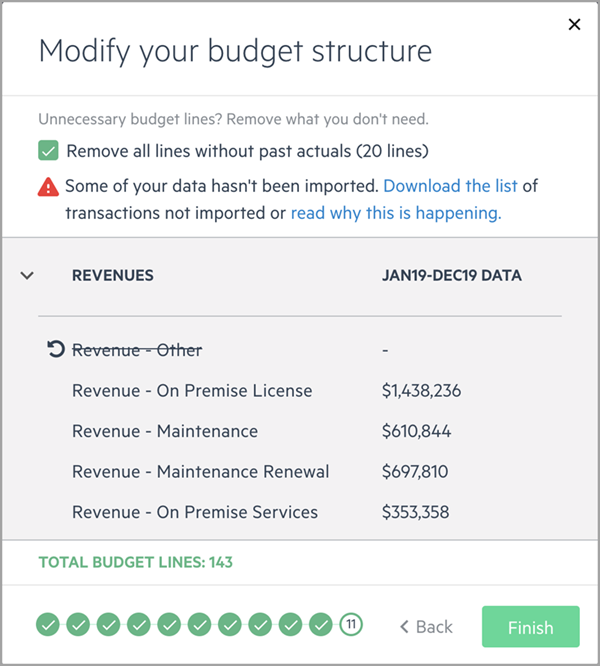 Click Download the list to see the list of transactions that won’t be imported to your budget. The downloaded Excel file displays the data from Intacct based on the data you chose to populate your budget, but that did not match your budget and dimensional hierarchy. For instance, if you created your budget for a single entity rather than for all of the entities in your company, the displayed data is relevant only for the selected entity.

From the Source column, you can see whether the data from Intacct is retrieved from the budget amount data or from the actuals amount data you selected for the reporting period. 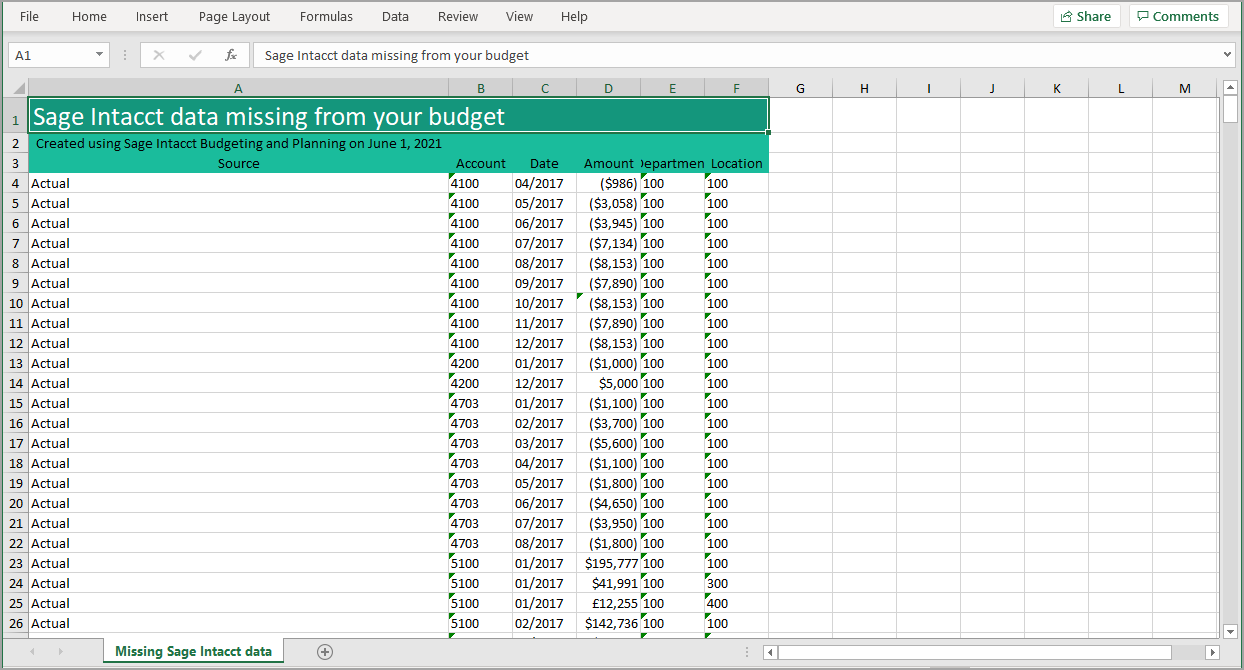